Today marks the four-year anniversary of Roo's death. To me, anniversaries are occasions to celebrate, so maybe that's the wrong term. Her life is a celebration of innocence and exuberance, but there's nothing to celebrate about the grim details of her final days.

I was going to let the day pass without writing anything. I was blocked and feel like I've said most everything I have to say. There's no point writing, or doing anything else, if a sense of obligation is your driving motivation.

You've heard my thoughts on how grieving the loss of a child is different from grieving any other loss - how it stays with you always; how it negatively impacts relationships with family and friends; how things that used to be tolerable, like a dead end job, suddenly become completely revolting.

I've also written about how you're damned if you do and damned if you don't when trying to comfort bereaved parents. Case in point: I received one phone call today inquiring how I'm doing. ONE. My only child - my soul - died, and one friend thinks enough of me to remember the date and check in on me.

It doesn't really matter. I didn't pick that lone call up anyway. I didn't want it, and I didn't want your stupid call either. If I did pick it up, I'd have bitten the caller's head off just for fun. But you can bet I made a mental note of that single call, and I won't forget the gesture.

In addition to feeling like I didn't really have anything new to say, the week was also progressing in a positive direction. My new t-shirt business isn't going gangbusters, but there's a steady buzz of interest. My training has certainly been going well. Maybe I could just let the day slip on by without harping on it.

I was in the house that morning with the dog while everyone else was at work. I wasn't paying close attention, but I didn't notice anything abnormal.

I left around noon, and Kris' mom came home for lunch shortly thereafter and found KC dragging her hind legs. They went to the vet, and he put her down early that evening.

We dug a little grave in the dark while the cat meowed forlornly in the background, placed her body in the hole, covered it with dirt, said a few brief words, and that was that. Here one minute and gone the next.

By morning, most evidence of the dog's existence had been put away. Gone were the gates used to keep her from wandering into random rooms and ransacking them in her never-ending quest for food. Her leash no longer hung from the door. Gone also were her bed and toys.

In truth, I felt more guilt than any other emotion. I mostly ignored KC and certainly never bonded with her. To say I'll miss her would be a lie. To say I regret treating her largely with apathy would be far more accurate.

I wonder sometimes if losing Ruby has made it more difficult for me to feel empathy for what I consider to be lesser losses. It may have, or maybe I'm just not much of an animal person. No point dwelling on questions for which I have no answers.

Kris' mom was by far closer to the dog than anyone else. KC was her pet. She walked her daily, made sure she was fed, talked to her in a silly voice, and did all the things you'd expect.

I felt bad for her. This next statement sounds odd, but I was relieved to feel something. I may not have loved the dog myself, but at least I related to her owner's loss. The ability to grasp another's pain hasn't completely left me. A heart still beats.

I scuffed through the next day-and-a-half, processing that KC suddenly wasn't here anymore. Several times going to the kitchen I caught myself stepping over the dog gate that wasn't there. Leaving an upstairs room I shut the door, realized I no longer needed to worry about keeping her out, and reopened it.

Nothing too earth-shattering for me here. They were even already talking about adopting a new pet, so maybe I'd soon be back to these slightly annoying routines. Maybe I'd even try to pet the new one once in a while instead of just breezing by. I got this, I thought.

Then I awoke to this morning's news of Chris Cornell's passing. I love Soundgarden's music and most of the music that came out of Seattle's early 1990's heyday. And now he and my daughter are oddly linked in my mind forever.

Any group that managed not one hit song, but two, with "Black" in the title leaps to the top of my list. We were a match made maybe somewhere darker than heaven, but a match nonetheless. Before I get too teary-eyed, however, perhaps I should share something I posted a few months ago in the wake of another celebrity's death. 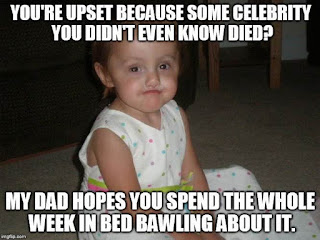 Ah yes, more feel-good sentiments from yours truly. Seems I hate your dog and your celebrity crush. Well now... that's not entirely true. If you went into a tailspin about Patrick Swayze, I didn't have much love for you. If you lamented his loss reasonably, and are willing to admit Roadhouse is way better than Ghost, I feel you a little.

In that spirit, I'll share my favorite Cornell story. Anybody remember Temple of the Dog? Cornell put this group together in 1991 with a couple Soundgarden band mates and a couple guys who would soon form Pearl Jam. They released only one album, but that lone gem contains one of my favorite songs, Hunger Strike.

Cornell, gifted as he was, was actually having trouble with some of the vocals during rehearsals. Eddie Vedder, with his signature booming baritone, jumped in and turned it into a duet. Egos took a backseat to collaboration, and a great rock song was born. Have a listen:


Temple of the Dog - Hunger Strike

Temple actually toured a bit in 2016 to celebrate the 25-year anniversary of Hunger Strike's release. That's how a proper anniversary is supposed to work; not by placing flowers on a child's grave or writing some dreary shit to try and keep her memory alive. Too bad I didn't make it to one of Temple's reunion shows.

KC didn't give us a bit of warning. One minute she was being the little pest she always was - sniffing around for food, turning over waste baskets, and eating dead bugs. The next minute she was gone.

Cornell didn't give any warning either unless something comes out later. Sure, he had his struggles with drug addiction like all those guys did, but he seemed to have made it through that. Hell, he played a show that was, from the accounts I read, completely normal just hours before his apparent suicide.

I haven't written much about the days leading up to Roo's hospitalization for pneumonia. Those final days, and her week-long hospital stay that ended with her death are sort of a blur in my mind. That I might recount something inaccurately has made me reluctant to talk much about it.

I found some journal notes I made literally hours after she died. I was frantically writing down all kinds of memories, scared to death I'd forget them and her along with them.

In my notes, I wrote about our last day together at a local park. She loved going there to chase the ducks, swing as long and high as I would push her, and swish her hands in water streaming from a large fountain I probably shouldn't have been letting her anywhere near.

She was apparently so giddy to go that she went and sat in her buggy while I washed our breakfast dishes. I don't remember that, so I'm glad I wrote it down.

Here's the hopeful part... I wrote that she was learning to listen better and held my finger patiently as we walked across the large field together rather than excitedly running ahead toward the swing set. If you'd ever met Roo, you'd know what a monumental accomplishment any sort of self-restraint represented.

I didn't write a single word in that journal about ragged breathing or lethargy. I know I didn't see any signs of her deteriorating condition just days before she was so sick she had to be ventilated.

Maybe she was so tough she hid the fact she couldn't breathe so she could play some more. Maybe we all just missed it. Maybe it just overtook her out of nowhere. Like I said, no point dwelling on questions for which I have no answers.

A daughter, a dog, and a damn fine musician. I was trying to get another "D" in there for alliteration and couldn't come up with one, so I threw in a swear word. Any excuse will do, I suppose.

All three were here one day and gone the next. None of them gave us any closure. They just went away. They were gone, nearly literally, in the blink of an eye.

Is there some trip you've been meaning to take?

Do you have some silly grudge you need to settle with an old friend?

Is there someone you just want to hug or spend time with who you miss?

And man, if you have kids, do you spend time with them? I'm not talking about basics like feeding and bathing and shuffling to and from activities and doing homework.

That's baseline. That's shit you have to do. As a matter of fact, fuck the homework once in a while.

I'm talking about really being present and spending time together. You know... talking to them, listening to what they have to say, playing a silly game together, and just getting to know who they are and what makes them tick.

I could continue, but I'm sure you get the idea. Now comes the cliche. Maybe I really don't have anything new to say, but this simple message is one that bears repeating.

We can't buy time back, so don't wait for a more convenient day. Whatever it is you're not doing even though that little voice inside your head is telling you to, start listening.

Do that thing now. There is no tomorrow. There's only today.


I love you. I wish we had more time.