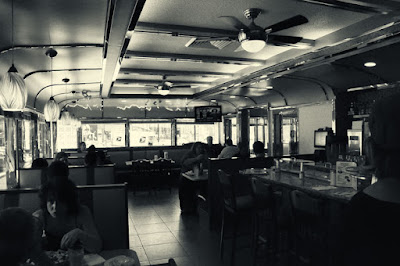 He sat at the counter sipping his coffee and waiting on his breakfast. This place was far from an authentic diner but was the best he could do in this upscale neighborhood dominated by trendy pretenders serving outlandish fare at outrageous prices.
If he stuck to the special, he was alright. Venturing out to the “chef’s selections” might mean avocado toast or oats soaked in kefir, whatever that is. Most of the menu appealed to a crowd more interested in sharing pictures of their trip to the diner on their social media than in actually eating anything resembling real staples like thick-cut bacon and over-easy eggs fried in the grease or biscuits and sausage gravy.

He was snapped out of lamenting the softening of the world and the disappearance of the classic American diner by a sudden realization that the place had gone eerily quiet. Knowing the designer-clad masses would never choose silence over their own blithering, he turned his stool to see what could have precipitated this minor miracle.

He didn’t have to look far, as the barrel of the AR-15 strapped to the man’s back was inches from his face. Glancing down the row, two other similarly armed companions took their seats.

He saw red in an instant. He felt his face flush with anger, and any hope of a self-preservation-inspired flight response kicking in was lost. There could have been ten of them and he wouldn’t have cared.

Loud enough to startle the big one next to him he bellowed, “Is that surrogate for the dick you don’t have that’s dangling from your shoulder supposed to intimidate me?”

Baffled, the burly biker-type turned and said, “What?” as his friends also spun their stools toward the commotion. Every petrified eye in the place was on the lone antagonizer as the three men jumped up to confront him.

“Oh, right, you and the two grits with you are too stupid to know what ‘surrogate’ means. I’m not asking to stand in for you with your skank wife; I’m asking if you think your toy gun scares me?”

The trio had fantasized about any number of different scenarios playing out when they decided to stroll down the town’s main street while displaying their assault rifles in plain view. Being hostilely confronted by an unarmed man wasn’t one of those scenarios.

Dumbfounded, their ring leader managed to muster, “We’re just out enjoying the day and exercising our right to bear arms. Do you have a problem with that?”

“You’re not going to do anything whether I do or not”, he scoffed. “My father was a hunter; you’re just an attention-seeking freak. So here’s the deal. You’ve got five seconds to put the barrel in my mouth and pull the trigger or leave. If I’m still alive in five seconds and the three of you aren’t gone, I’m going to stab you in the throat with my fork and listen to the gurgling sound of you drowning in your own blood while beating those two to death with their own guns. Just give me the reason I’ve been begging for.”

And then he punctuated the insanity, leaning forward, opening wide to invite the gun’s barrel, and blaring, “Ahhhhhhhhhhhhhh” directly into the man’s face.
They had no choice, and he knew it. They weren't killers, so they weren't going to shoot him. And never mind the numbers advantage; the second he called their bluff they had no interest in fighting.

Getting a final dig in as they tried their best to move quickly and discreetly toward the door, he taunted, “You’re right, fat boy. It’s not worth me doing exactly what I said I would.”

The momentary excitement over, he turned back to the counter and took another sip of coffee as if nothing had happened, but the rage simmered just below the surface. He breathed deeply and steadied his hand to keep from spilling.

“Wow mister, that was something else!”

Surely the hipster would go away and he could finally eat in peace if he didn’t acknowledge his presence.

Lingering annoyingly, his new admirer added, “It’s about time we stood up to those right-wing nut jobs and put them in their place.”

“We?” What did you do, tofu, besides sit there and piss your skinny jeans?

The kid may have been a naive idealist, but he didn’t have to have much life experience to realize he’d badly misread the room. He started backing away, but it was too late—the stranger had a fistful of his spotless “work” jacket and had yanked him forward and nearly off his feet. They were only inches apart, and the kid was helpless.

“There’s no ‘we’ here. If this place burned to the ground, I'd find a way out and leave you to die. How's that for getting canceled? I hate you and your rich little friends as much as I hate them. You just weren’t in my face disrupting my peace like they were. But now you are.”

He released his grip on the jacket and gave a little shove, causing the kid to stumble backward. Their booth emptied in seconds as the group scrambled for the door, leaving several twenties on the table.

Shaking his head in disgust, he returned once more to the now-cold coffee. Too bad he didn't have a little whiskey to splash in it after the morning he'd had.

He started to motion to the waitress to freshen his cup when he realized there was no waitress. She must be hiding, petrified, in the back, he thought.

In fact, she wasn’t the only missing person. The restaurant had almost entirely emptied, and he knew he'd better leave in a hurry before the cops arrived. He felt a little bad about the commotion he’d caused, but mostly he was just irritated that there’d be no breakfast this morning.

He pulled a five-dollar bill from his wallet and left it next to the cup. Bracing himself against winter’s chill, he trudged to the door and out into the cold, alone.
Posted by Chuck Miller at 6:12 PM No comments: